The technically brilliant trio opened with the evergreen “Hear A Rhapsody”, before the gutsy and sensitive Sumi Tonooka dug into the keys, presenting two spell-binding original compositions: the ballad-like “Shadow Waltz” and the grooving “Taking Time“….Both with very exacting titles such as “Evidence” by Thelonius Monk, and well-known pieces like “Night and Day“, this high-class trio secured its position in the highest echelon through its unusually quick rapport, arrangements that shed new light on standards, and virtuosic improvisations….A genuine live experience of the highest magnitude!

During a career spanning more than 30 years that has taken her from bases in Philadelphia & Boston, to New York & Seattle, Tonooka has been developing a body of work that surprises and delights audiences – quietly piling up accolades from jazz writers and fellow musicians.

Her recent activity as a composer includes receiving the Music Alive: New Partnerships
residency with The South Dakota Symphony Orchestra through New Music USA to take place in November 2015. The residency will culminate with a premier of her symphonic work Full Circle and a new work for woodwind quintet.

In 2013, the American Composers Orchestra and The Center for Jazz Studies at Columbia University, in cooperation with EarShot, the National Orchestra Composition Discover Network, presented Tonooka’s first work for symphony orchestra as part of the second Jazz Composers Orchestra Institute (JCOI) Readings.

In her most recent solo recording, NOW, “Tonooka covers a lot of stylistic territory in a perfectly sequenced show, and plays with a rare spirituality and musical sagacity. A superb solo piano outing” (All About Jazz). Her 2009 recording, Initiation (2009 ARC Records, with tenor saxophonist Erica Lindsay), garnered an “Honorable Mention” in the 2010 Village Voice Jazz Critic’s Poll. Recording often in trio or quartet with such noted jazz stalwarts as bassist Rufus Reid and drummers Akira Tana and Lewis Nash, Tonooka characteristically blends her own compositions with highly personal readings of jazz standards.

In addition to her symphonic and chamber works, jazz recordings and performances, Tonooka has composed over a dozen film scores, including the Academy Award-nominated Family Gathering by Lise Yasui and Daring To Resist by Martha Lubell, aired on PBS. She is also featured in A Note of Hope, released in 2011, a full-length documentary from Citygate Films on the youngest victiims of HIV/AIDS in Africa. She toured West Africa as part of a sextet featuring her musical compadre of two decades, jazz violinist John Blake, Jr. Their recorded output includes A New Beginning: Live at The Village Gate, Kindred Spirits (as a duo), and the Traveler featuring Boris Koslov on bass and Johnathan Blake on drums. As a member of the Rufus Reid Quintent, Tonooka appears on the CD and DVD The Rufus Reid Quintent: Live at the Kennedy Center (Motema). The group appeared at Dizzy’s Club Cocoa Cola at Jazz at Lincoln Center in New York in 2007 for the release performance.

Tonooka’s career has been chronicled on several highly regarded jazz books, including Living the Jazz Life by Royal Stokes, ln The Moment by Francis Davis, and Madame Jazz by Leslie Gourse (all on Oxford University Press). As a professional response to an inherent void within the music industry, Tonooka, along with alto saxophonist Chris Burnett and tenor saxophonist Erica Lindsay, co-founded the Artists Recording Collective (ARC), an internationally recognized brand and professional recording label. She now divides her time between her responsibilities as the Chief, Public Relations Officer for ARC, composing and performing for an increasingly widespread audience of jazz aficionados. In his liner notes to pianist, composer and educator Sumi Tonooka’s fifth CD, Long Ago Today, journalist Russ Musto restated his praise from thirty years ago:”…it has been a pleasure to hear her blossom into one of the most talented musicians of her generation.” 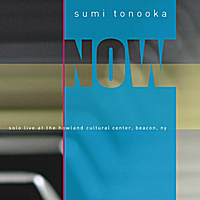